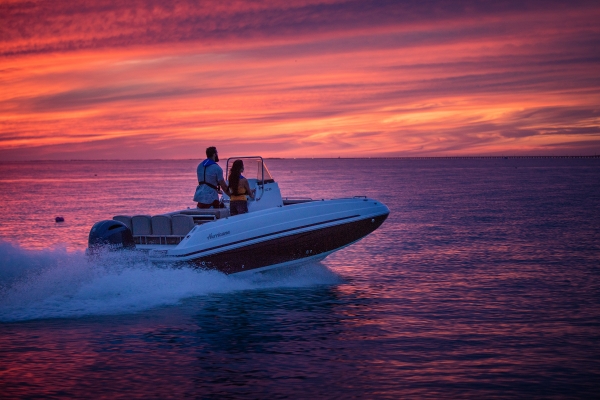 When helping customers pick out their next outboard motor whether it be new or used, one common question we ask is what style control box do they need? This information is important in terms of pricing and installation for rigging the most practical control box for your set up. Since every outboard manufacturer makes a handful of different style control boxes, knowing what style control is on the boat or what options you can go with is going to make purchasing a new motor a whole lot easier and less stressful. In this article I will run down the different styles and what kind of boats they are typically found on.

For the most part your typical recreational boat will have what is called a Dual-Function Control Box. This means that both the shifting and throttle control is all operated by one lever. Pushing the lever forward past neutral shifts the motor into gear and the farther you push increases your speed. Going backwards in the opposite direction will put you in reverse. Shifting is done quickly and can only be done at lower RPM's which helps protect the motors shift mechanism. With a Dual-Function Control Box you will also need two cables, one for controlling the shifting and the second to control the throttle.

The first and probably the most commonly used box is a Side Mount Control Box. This mechanism has the lever for controlling your throttle and shift, a button easily accessible by your thumb for tilt and trim, a fast idle lever for starting, and a built in key switch. The lever can be switched to either side of the box so that mounting can be on the right or left side. These boxes give you a lot of options as far as to where you can mount them. I have seen them on the rail of pontoon boats, bass boats, the right and left side of consoles, or attached to the inside wall of aluminum and fiber glass boats.

The next most popular control box is what is called a Binnacle Control Box. These are a little more fancier and are mounted on the top of the boats console. The throttle and shift is also controlled by a single lever and have the tilt and trim button near your thumb. The down side for these control boxes is that they do not have a built in key switch so you will need to install an external one which will cost you more money to buy that separate. These also come in a dual lever for larger big water boats that are running twin motors. You will see this style of control box on pontoons, larger fishing boats, and your more luxurious boats.

The last style of control box is called a Flush Mount Control. These are mounted on the inside wall of the boat and they only have the lever exposed giving the boat a much cleaner look. Just like the others controls, the throttle and shifting is done by a single lever and there is a tilt and trim button at the top end of the handle. Like the Binnacle Control Box, an external key switch is needed for starting. You will see these on crafts such as bass boats, speed boats, and jet boats.

These are the three basic styles of control boxes you will come across when buying a new motor and knowing the difference will make the buying process easier for you. Usually the dealer your working with will have some sort of idea based on what kind of boat you have, although some boats like pontoons can go with a few different options. So if your looking at a new motor, I would suggest you know what type of control you have to avoid any headaches.