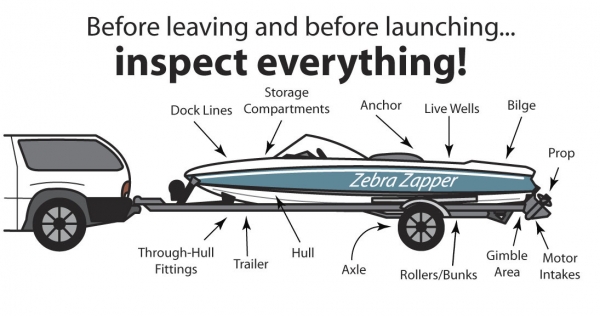 New boating and fishing laws are now in effect to prevent the introduction and spread of invasive species. Michigan's Natural Resources and Environmental Protection Act have made some changes for boaters and anglers that may switch up your regular routine. The amendents are intended to strengthen protection for Michigan's waterways against the introduction and spread of aquatic invasive species.

WHAT YOU NEED TO KNOW:

Before this change took place, the law only required that a boater not place watercraft or trailers in the waters of Michigan if an aquatic plant is attached to their equipment. This is still required of you, and the new changes require all of the following prior to transporting any watercraft over land:

This means that after trailering boats, and before getting on the road, boaters must pull plugs, drain water and remove plants and debris every single time.

For anglers, these amendments codify the Michigan DNR’s Fisheries Order 245 regarding the release of baitfish, collection and use of baitfish and cut bait, and release of captured fish, specifically:

Whether purchased or collected, unused baitfish should be disposed of on land or in the trash – NEVER in the water! Any baitfish an angler collects may be used only in the waters where it was originally collected.

Anglers who are catching and releasing fish should only release the fish back into the same water or in a connecting body of water the fish could have reached on its own.

VIOLATIONS: state civil infraction and may be subject to fines up to $100!

To comply with the law and prevent the introduction and spread of aquatic invasive species, you'll need to: